I'll start by saying I'm not trained in formal linguistics. So I won't have the slightest qualms being told what I'm saying doesn't make too much sense.

I'm a native speaker of American English. I've studied German, Latin, French, and Japanese in school. I've been in Japan for almost two years and had worked for years to be ready to move before that. I now, speak, read, and write the language to a decent extent (failed the N1 by 4 points a few months ago). In general, I have not had any difficulty perceiving the sounds produced by Japanese as the same kana they do.

Recently, however, I've encountered a feature from a subset of Japanese speakers where they produce /rj-/ and I hear /j-/. For example, students introducing themselves Ryou or Ryuusuke [are Japanese characters allowed on linguistics.se?]. I only hear yo and yusuke even if they repeat it. If different Japanese native speakers say the same names, I clearly hear the /rj-/. The speakers who produce a sound I fail to hear are male native speakers of Japanese aged about 19 living in Hokkaido (and generally native to Hokkaido).

Again, this is only a subset even for people in the same sample group. I don't normally have difficulty hearing /r/ or /rj/ from other Japanese speakers and produce them in ways where they are perceived as correct by native speakers in Hokkaido.

Background for those not familar with Japanese: These are two mora openers produced by combing the symbols for "ri" and "yo" and "ri" and "yu" respectively.

I've gotten some helpful answers from the Japanese.se as to what might be going on that help explain why there ain't much sound there. Native Japanese correctly hear /rj-/ even though there are minimally different names (in the case ryusuke there is a name yusuke)

This wikipedia entry hints at what could be answer in mentioning a flexibility in how the /r/ sound in Japanese can be produced. But my random googling gives many different accounts of what /r/ in Japanese is ("an apical postalveolar flap undefined for laterality" vs retroflex flap)

Here's a sample of a speaker who produces it in a way that is hard for me to hear. I definitely hear the leading /r/ on his first try but don't perceive it on his second very well. Can someone tell me how he makes his /r/ sound based on the sample?

It's really difficult to answer a question like this; you're asking "what am I NOT hearing?" and there are potentially an infinite number of things you aren't hearing!

Here is a spectrogram of the sound samples you provided: 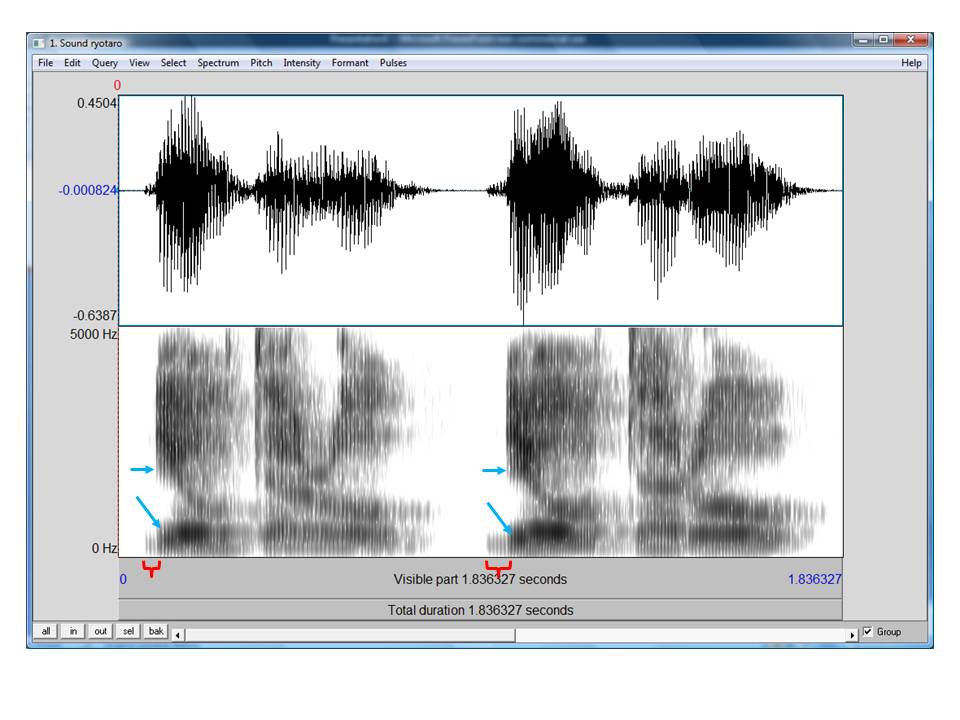 I am a native speaker of American English with near-native tendencies in Japanese (my father is Japanese), and to me the initial r- is quite clear in both cases.

There's a lot of reverb in your recording, so the spectra are kind of "smudged", but you can clearly make out a voice bar at the beginning of each word (indicated with red braces). These voice bars correspond to the period of time when the speaker's tongue is in full contact with his alveolar ridge (or somewhere slightly behind it) and so the oral cavity is completely sealed, but his vocal folds are already vibrating. As you can see, the voice bar is actually longer in the second rendition of the word, which one would expect to serve as a stronger cue to the r-.

Often we get cues to place and manner of articulation from formant movement. In a syllable like [da], for example, the first formant will rise from the [d] to the [a] and the second formant will fall, cuing an alveolar obstruent. However, in the case of going from a post-alveolar segment to a [y], the tongue doesn't have very far to go, so the formant transitions aren't going to give us very much information. I've pointed to the first and second formants with blue arrows in the spectrogram; as you can see, the first formant starts relatively low and then quickly rises, and the second formant starts relatively high and then falls. These movements correspond with the [y] transitioning into the following vowel--the [o]. If anything, the aspect of the formants that is cuing ry- as opposed to just y- is that the period of time during which the first formant stays low and the second stays high is relatively short; in other words, the [y] in ryoo is probably shorter than the [y] in yoo would be.

The flap-y cluster at the beginning of a word is way out of bounds for English phonotactics, so as a baseline it's not surprising for a native speaker of English to have some trouble consistently hearing the cluster as such. A similar phenomenon causes words like tsunami to get reduced to [sunami] in English.

See where I'm going with this? By recording all four conditions, you can separate out the acoustic cues you are picking up on with the first speaker from those you are not picking up on with the second speaker. For example, maybe the spectrograms from the first speaker will reveal some burst noise for ry- but not for y-, whereas burst noise will be absent for both ry- and y- in the spectrograms from the second speaker.

I know I haven't fully answered your question at this point; I've made a couple of guesses as to what cues the ry- for a native speaker, but that doesn't necessarily get at what you aren't hearing. The problem is that we don't have sufficient data to do so. Hopefully I've at least made it clear why the data are insufficient and how you can take steps to get closer to an answer!

Not the answer you're looking for? Browse other questions tagged phonetics phonemes or ask your own question.

9
How can I differentiate between syllable-initial [ɣ] and [ə] using Praat or other software?
4
Production and dialectology of Dutch /s/
5
At what age do children lose the ability to hear phomene differences that their native language doesn't make?
6
Sounds that are treated as phonetically equivalent
0
Arabic /R/ - correct pronunciation in Modern Standard Arabic
3
Three questions regarding the distinctions between certain broad and slender sounds in Irish
17
Why vowels sound different from each other
3
Why does John Batchelor record these vowels for Ainu?
0
Long vowels in the world languages