The complement of postmodifying prepositional phrases compounded by "and"

How does one parse "the need for and development of education"? "Education" naturally acts as the complement of both the prepositions "for" and "of", and the prepositions surely postmodify the nouns under N'. The question is this:

Since "education" is the unified complement of both the prepositions, how is it parsed?

This is what I've got so far: 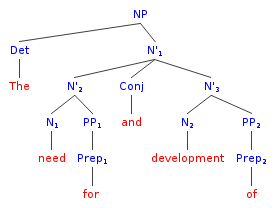 As Ivan writes, the example in the question is indeed an example of so-called right node raising (RNR). I can provide some more background information about the phenomenon. First, note the term itself (i.e. right node raising) is due to Postal (1974), and it indicates the analysis he proposed at that time. He assumed that in canonical cases of RNR, e.g. [You like] but [I dislike] the cheese, that at deep structure, two complete clauses are coordinated. The material that ends up being shared to the right is raised out of both clauses and attached to S as an adjunct would be, but only one of them is realized; the other is deleted. Many linguists who have studied the phenomenon (including myself) reject Postal's analysis, but the terminology that Postal employed remains.

There is no consensus about the best analysis of the phenomenon. What this means for your example is that you have some freedom to posit a parse that you believe fits your understanding of syntax best. The Wikipedia article that Ivan linked to (https://en.wikipedia.org/wiki/Right_node_raising) gives three possible theoretical accounts; you might choose the one that you think is best.

This is basically consistent with the partial parse shown in the tree in the question. The strings indicated by brackets cannot be construed as constituents in most theories of syntax. This observation goes to the core of the RNR mechanism; it is why the phenomenon is noteworthy and worthy of study. The basic question, then, concerns the strings that can and cannot be coordinated and shared in such cases.

The conundrum of RNR is very visible in the tree. The difficulty concerns the attachment of education: Where should it appear in the tree? In my view, there is no good answer to this question given the phrase structure parse shown. In other words, there really is no convincing way to include education in the phrase structure tree. What many would therefore choose to do is assume that a first instance of education is elided from the first conjunct, as Ivan states. At an underlying level of representation, the following conjuncts would therefore be present:

I do not think ellipsis is the right way to approach the phenomenon, but it is probably what you want to produce an at least semi-plausible parse. My preferred analysis of such cases is developed in a dependency grammar (DG) theory of syntax; it does not involve ellipsis. If interested, I will happily provide the articles that I have written that examine the RNR phenomenon in some detail.

Is your question about an analysis or about automated parsing?

The phenomenon is dubbed right node raising. Search for it or read the wikipedia article that gives a nice overview and mentions the current analysis, including one which states an elided constituent on the left:

(1) the need for education and development of education

That would be your starting point for parsing it.

Not the answer you're looking for? Browse other questions tagged syntax syntax-trees prepositions compounds or ask your own question.

13
What determines how noun compounds are formed in a language?
11
How usual is it for languages to have both prepositions and postpositions?
0
Minimal set of prepositions
3
NPs as adverbials; how to parse them?
2
Phrasal verb? Adjunct vs complement?
1
"In his desk(,) he kept a black book." Is "in his desk" a preposed complement here?
4
Constituency-based parse trees and the word 'both' in noun phrases
1
Syntax trees associated with Prepositional Phrases as subject
0
What is the more natural parsing, the one that leads to the preferred reading of the sentence