The example above is not to be confused with "ibubapa Ali", which means "Ali's parents".

The main problem is the (GEN) terminal. How should nouns in the genitive without explicit genitive case marking be represented in X-bar tree diagrams? Is it plausible to have (GEN) to make clear the genitive feature of the noun?

This is what I propose, but I'm not sure if it would be accepted by or is theoretically sound for other linguists: 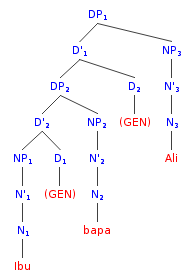 Please disregard the numbering of the nodes.

There are a couple of points that should be kept in mind when analyzing the structure of NPs. Perhaps the most controversial issue concerns whether noun phrases are NPs or DPs. The question assumes DPs, but that is a controversial assumption. A number of frameworks (Head-Driven Phrase Structure Grammar, Construction Grammar, Categorial Grammar, Meaning-Text Theory, etc.) assume NPs, not DPs. Hence one could reject the analysis shown based on this controversy alone. For arguments for and against DPs, see this article: https://en.wikipedia.org/wiki/Determiner_phrase.

My personal view is that the traditional NP analysis of noun phrases is more defensible, and I think that the example illustrates a difficulty with the DP analysis in general. Most discussions of the DP-hypothesis remain with single determiners; they do not explore stacked possessives like in the example in the question. Consider the following examples in this regard:

If the 's is the head of the phrase Ali's father in (1a), then we should assume that the first 's is also the head of Ali's father's mother (not the second 's) in (1b). But intuitively that does does not seem right.

I think the traditional NP analysis is more consistent with such data, and in fact there is an empirical argument that supports the NP analysis, i.e proform substitution:

Concerning the second tree in the question, I think the constituent structure shown would be accurate for the NP Ali's father's mother, because the combination Ali's father's would receive the status of a constituent. But the labeling in that tree is all off.

Not the answer you're looking for? Browse other questions tagged x-bar-theory genitive or ask your own question.

12
Are there any languages where the genitive case changes according to its object?
3
Examples of Equative Genitive Adjectival Languages
3
What is the word class of the first part of a partitive genitive?
3
X-bar theory without movement
3
Case assignment with prepositions
3
Case in English phrase "friend of mine"
4
What are the subjective and objective genitives?