What is an "adjectival article"? Apparently Albanian "të" is one

Being in Albania I decided to sit down with a word frequency list of the language and look each up so I would know some of the common words I see around me.

The second most common word in Albanian is "të", which Wiktionary describes as an "adjectival article". (A neat coincidence after my recent question asking what other kinds of articles exist). Here are Wiktionary's senses:

So what is an "adjectival article"? Where can I read more about them? What other languages have them?

From the explanations and examples in the wiktionary page you mentioned, it is not a real article, it is a word that combines with an adjective to mark its definiteness (and in this case, also gender and noun case). In other words, it is to adjective as an article to a noun. An example (from wiktionary)

(libër = book, mirë = good. Note that libër has the article një and mirë has the "article" të).

Wiktionary goes on to list the different adjectival articles Albanian has, which varies according to definiteness, gender and noun case. 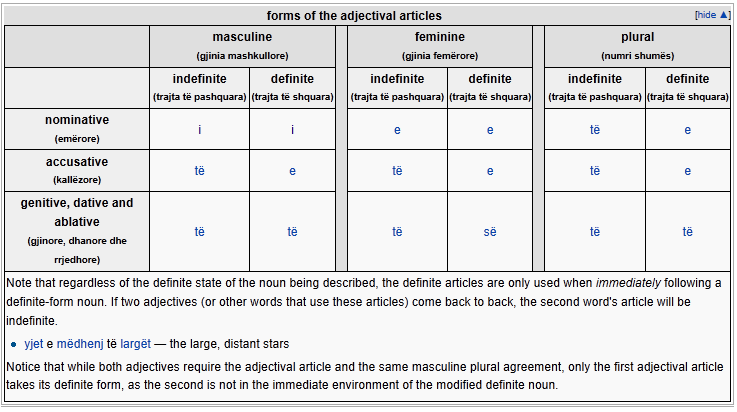 A little experiment with Google Translate and Google Search:

In albanian të can be used for many things. I am not a linguist, but albanian is my native tongue.

but you can have this

And in fact it appears likely that these linking particles are historically weakened forms of the old demonstrative stem that underlies the modern ai, ajo "he, she; that one" and ky, kjo "this one". This stem can be found by taking the initial a- off of ai, ajo, and the initial kë- off of all forms of ky, kjo except for the nominative m.sg. and f.sg. So we find m.sg. i, f.sg. jo (or an earlier form of it) could have been weakened to e; të comes from accusative të or masc. dative tij and was generalized to the plural; së comes from fem. dative saj. At one point they evidently came to be used as relative pronouns "(that/those) which" as well as plain old demonstratives--"that/those".

27
Do some languages have articles besides the definite and indefinite articles?

9
Why is the definite article in Balkan languages always called a suffix when it really seems to be part of the inflection?
1
The word 'all' as an article, rather than an adjective?
2
Retroflex /r/ in Albanian?
4
When analyzing a set of corpora, are there any standard practices with regard to the classification of gerunds?
1
Albanian minimal pairs for r vs. rr, xh vs. gj, and q vs. ç
6
Why does Italian use definite articles before possessive adjectives, except when these are followed by a singular family noun?
6
Understanding the purpose of determiners/articles/demonstratives in language
4
What is the meaning of the Latin names of grammatical cases (in general, not in Latin)?
8
What does Eastern Aramaic have to say about "(definite) articles are acquired, not lost"?