What is this language? Is it an ancient language?

I have recently procured an artefact, which was excavated in Yemen. At the bottom of the artefact there is engraving as shown in the picture. Some of the letters (on two sides) look like Egyptian hieroglyphs, but I am not sure, and I have no idea what the ones in the middle are....

Could someone please help me figure out what this is (and preferably what it means)? 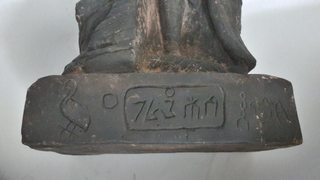 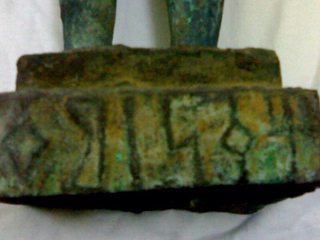 Some of these letters are clumsy imitations of Ancient South Arabian script, others are made up. It looks like a fake.

Many years ago I worked as a volunteer at the National Museum in San’a. The storeroom of the museum was full of this sort of thing. The government had the enlightened policy of paying farmers for any “antiquity” they brought in, even if it was obviously fake. The idea was to discourage them from selling authentic antiquities on the private market.

PS. These comments refer to the first picture; the second one was added later.

I can read the writing on your second picture. It has (from right to left) the letters ḥqn / mf; I assume there is more writing on the sides and the back. The visible letters do not form complete words.

Not the answer you're looking for? Browse other questions tagged historical-linguistics history african-languages ancient or ask your own question.

7
Are There Ancient Greek Words Descended From Sumerian?
1
Participle of empty verbs in ancient Hebrew
2
Can we use etymology to determine the nature of synchronic semantic and morphosyntactic differences between (near-)synonyms?
0
I have some questions about deciphering an ancient language
13
Origin of h as a modifier letter
0
What was the diffusion and the use of dictionaries in ancient times? Every civilization with a dictionary?
3
Had the ancient languages fewer words than modern languages?