What is the origin and meaning of the word/name "Idora"? (Shortened)

I have been researching the word "Idora" for a couple years now in hopes of discovering the meaning as it applies to the defunct trolley park "Idora Park" formerly in Youngstown, Ohio.

"Idora Park" was named as the result of a contest in 1899. The local newspaper simply stated that the word was believed to be "indian" and was the former name of "Lanterman Falls"- a waterfall very close to the property. The falls were in fact known as Idora Falls, as can be seen in a 1874 atlas of Youngstown. The earliest reference I can find to the falls being associated with the name is in a Mahoning Register newspaper article from 1872. The article claims that the falls have been inaccurately referred to as the Mahoning Falls, while the falls in fact exist on a tributary or affluent of the Mahoning River. Instead, the author confidently goes on to proclaim the correct name as the Idora Falls.

For those who do not know the Ohio River well, Big Beaver branches north from the river before it even reaches the Ohio border. One of the branches of Big Beaver is the Mahoning River. Once the Mahoning reaches Youngstown, there is a small branch that heads south currently known as Mill Creek. It is on this small tributary that the falls flow next to an old mill now known as Lanterman's Mill.

Does anyone know the origin and meaning of "Idora" as used to name places like the "Idora Falls"? Is there a source that the Youngstown author drew from to declare the name with such confidence? The name "Idora" doesnt appear on any map of the Ohio or Mahoning River that I have seen, yet the 1872 community apparently thought the author's claim held some weight. I greatly appreciate any help you can send me. 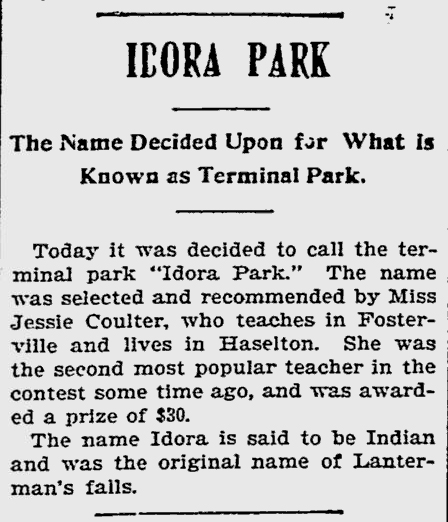