Corpus Linguistics: How do I compare date from two corpora correctly?

I want to count the occurrences of the English “wanna” structure diachronically, in order to create a frequency per century chart.

My first step was to use the Corpus of Historical American English (COHA). I found 210 occurrences in the 19th century and 1590 in the 20th century. However, I also want to count the data from the 21th century and for that I need to use another corpus, since COHA doesn’t have data from this century.

Fine, so I went to another corpus (a synchronic one) and found 1274 occurrences. The result is shown in the picture.

My problem is: how can I quantify this data correctly? I am only getting more results in the 20th century because of the size of the corpus (COHA has 400 million words and the synchronic current corpus has only 2 billion). Is there any math calculation I may use in order to make such frequency index correct? 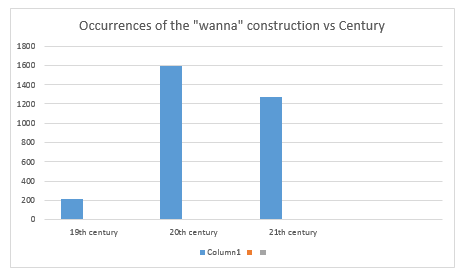 It’s common to express relative corpus frequencies using a standard denominator (per million, for example), as suggested here. CELEX, for another example, provides both the per-million and the log frequency.

6
How to establish word frequencies from a corpus?
4
Comparing frequencies of two corpora
2
building a corpus from COCA KWIC
2
register variation: unbalanced corpus sample
11
How to best clean a large historical corpus ridden with OCR errors