What numeral system is on this Hyderabad banknote?

This banknote from Hyderabad (Hyderabadi rupee) has five different numerals in the circles on the right and left sides. From the bottom they are Hindu-Arabic, Kannada, Marathi and Telugu. But what is the one in the top? I believe the rest of the text on the banknote with arabic letters is in Urdu, but Urdu normally uses other numerals. How/why does that correspond to the number 5? 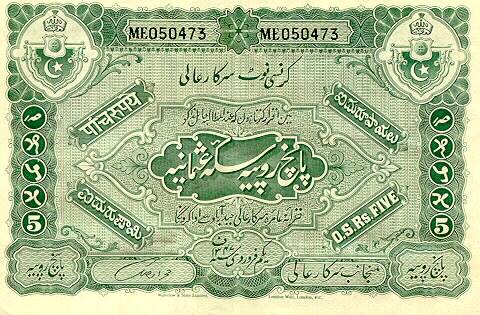 This is really an extremely interesting question that made me make a little investigation and with the help of @fdb I learned about the unique Siyaq (Arabic سياق siyāq ‘order’) numerical system I had never heard of before. The system was originally developed by Arabs and later was used in official Ottoman and Indian documents:

"Siyaq notation is believed to have been developed during the Umayyid period in the 8th century CE and advanced by the Abbasid state, which ruled much of the Middle East and parts of north Africa from 750–1258. The earliest document containing Siyaq numbers is a list of expenses presented to the Abbasid ruler al-Muqtadir Bi’llah by his minister ’Ali ibn ’Isa, which is dated to 918–919. The notation system was adopted along with Abbasid accounting techniques by the Ilkhan dynasty, which ruled parts of the Middle East and Central Asia from 1258–1353. The system was continued by administrators of the Ottoman Empire from 1299–1924."

Here is the Proposal to Encode Arabic Siyaq Numbers in Unicode (PDF) with charts of all the numerals and the description of the siyaq numerical system.

However, the Hyderabad banknotes use not the original Arabic Siyaq numerals, but their Indian variants which are in some ways different from the Arabic ones.

"Similar to other Siyaq traditions, the Indic Siyaq Numbers are a specialized subset of the Arabic script that was used for accounting and in general for recording numbers. The basic Indic Siyaq Numbers are stylized monograms of the Arabic names for numbers. The numbers for large decimal orders, however, are derived from words of Indic languages. The period during which Siyaq was introduced in India is difficult to determine, but the system was in common usage under the Mughals by the 17th century and it remained in usage into the middle of the 20th century."

Here is the Proposal to Encode Indic Siyaq Numbers in Unicode (PDF) with charts of all the numerals and a detailed description of the notation system.

This is a very interesting question. The numbers at the top of the columns on this note, and the other three helpfully supplied by Yellow Sky, are heavily stylised Persian or Arabic words:

I am guessing that these forms come from some sort of commercial shorthand, but would be happy to hear from more knowledgeable members.

Not the answer you're looking for? Browse other questions tagged numerals urdu or ask your own question.

5
Are there languages which lack a full number system but which have an indefinite article?
15
Which modern, spoken languages do not use the decimal number system?
8
Old-Persian Numeral System
0
In use numeral systems
3
What kind of a word class are numbers?
5
Numeral-noun number agreement - how popular it is
4
Is the numeral or the noun the head? Does it vary depending on the language?
1
Prevalence of Western/Latin Arabic numerals (digits 0-9) in cultures using the Hindu-Arabic Numeral System?