Why don't the French pronounce consonants at the ends of words?

I am curious what could have caused the shift in pronunciation. I presume it must have occurred after the spelling of words was standardized. According to the History of French wikipedia article, this happened in the transition to Middle French around 1500 and to Early Modern French around 1700.

Word final consonants in French are pronounced, but only under certain conditions that has to do with group- or phrase phonology; they are usually not pronounced at the end of a phrase or a word uttered in isolation.

Descriptions of late 17th century French suggest a stage where most consonants were (still) pronounced, but some were elided mainly before other consonants. These elisions eliminated some consonant clusters inside word groups.

Word-final consonants are pronounced when the next word starts in a vowel in certain groups, the phenomenon known as liaison.

Liaison is considered obligatory within some groups, eg between article and adjective/noun

but not between phrases, eg between a subject noun and verb

Contemporary descriptions of 'good' pronunciation emphasize cases when word final consonants are elided and not pronounced, i.e. the reverse of modern descriptions.

Like in modern French in these examples the final consonant of a pronoun/article before another consonant was not pronounced, but (group) final -s had not yet been generally dropped:

Like in modern French (group) final -t in these examples was dropped, and unlike the 'l' of il is also elided before a consonant.

These examples suggest that consontants were elided first inside specific word groups to simplify clusters, eg from |vousdites > voudites|, |ilfait > ifait|, before they were elided anywhere else. Most of these elisions also apply for modern French, but some have been reversed like in the case of 'il fait.'

Compare La Génie de la langue françoise (1684) which has this to say about word final -f:

So at this point in time for some words the -f was never elided, but for some it was elided but only before consonant in the same group, 'bœuf' (beef) but 'bœusalé' (salted beef), 'neuf' (nine) but 'neusoldats' (nine soldiers).

Interestingly most of the words the first group - where -f is never elided - are adjectives, and would most commonly occurs as the final word in their group. The elisions in the second group are not current in modern French, but some elisions before plural are, 17 Cent 'bœus' for "bœufs" is today 'bœu' since plural -s is now generally dropped.

Weakening of consonants (typically stops > fricatives > approximants > nothing) is a process which has affected many languages at many times. It's particularly noticeable in French because, as you say, the orthography predates the change; but the same is true for certain patterns in English (most words that contain 'gh', for example, and for non-rhotic accents such as most dialects of England, 'r' after a vowel).

What is slightly unusual in French is that final consonants have often been lost except where followed by a vowel - it's much more common to find consonants lost between vowels, and indeed this happened in French earlier, eg Lat. credere > Fr. croire. But the fact that the process has mostly affected only word-final consonants means that it is a different process.

Your question's a bit ambiguous: you could be asking about silent consonants which do exist in the writing but are never pronounced, or those that are there but pronounced only depending on what sound follows (i.e. next word's initial sound).

In the 1st case it's because French orthography is veeery conservative, in some regards even more than that of English, so it retains spellings closer to Latin even if nobody speaks like that anymore, like "est": nobody has pronounced that "s" in more than one thousand years. 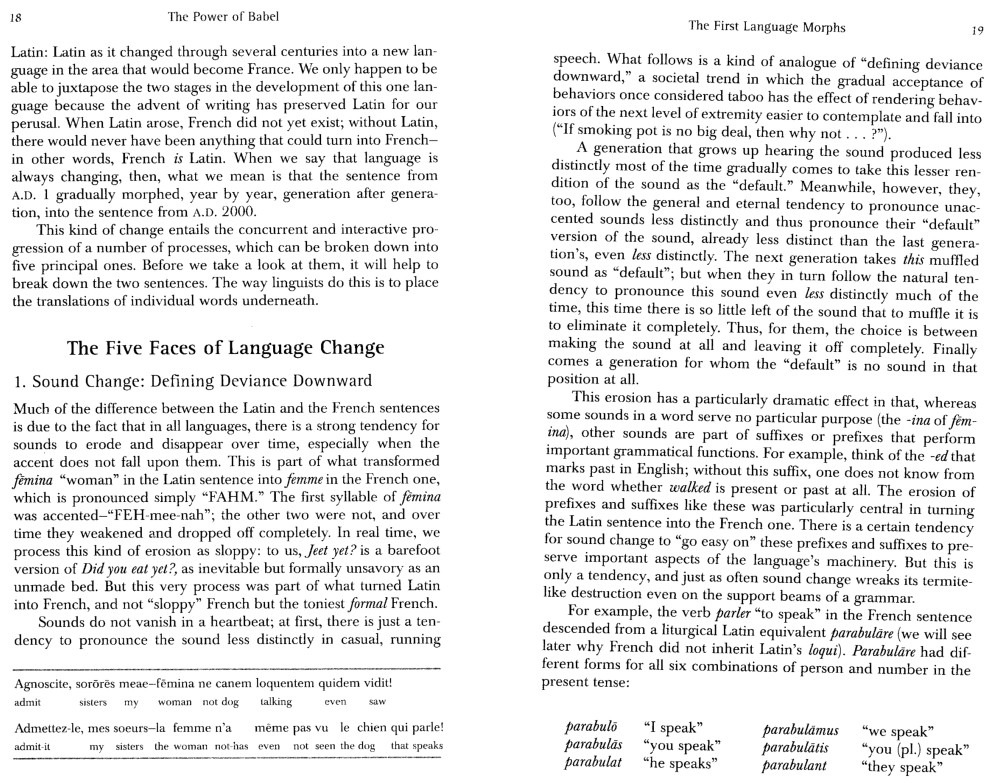 The Five Faces of Language Change

Much of the difference between the Latin and the French sentences is due to the fact that in all languages, there is a strong tendency for sounds to erode and disappear over time, especially when the accent does not fall upon them. This is part of what transformed femina "woman" in the Latin sentence into femme in the French one, which is pronounced simply "FAHM." The first syllable of femina was accented -- "FEH-mee-nah"; the other two were not, and over time they weakened and dropped off completely. In real time, we process this kind of erosion as sloppy: to us, Jeet yet? is a barefoot version of Did you eat yet?, as inevitable but formally unsavory as an unmade bed. But this very process was part of what turned Latin into French, and not "sloppy" French but the toniest formal French.

Sounds do not vanish in a heartbeat; at first, there is just a tendency to pronounce the sound less distinctly in casual, running speech. What follows is a kind of analogue of "defining deviance downward," a societal trend in which the gradual acceptance of behaviors once considered taboo has the effect of rendering behaviors of the next level of extremity easier to contemplate and fall into ("If smoking pot is no big deal, then why not...?").

This erosion has a particularly dramatic effect in that, whereas some sounds in a word serve no particular purpose (the -ina of fem-ina), other sounds are part of suffixes or prefixes that perform important grammatical functions. For example, think of the -ed that marks past in English; without this suffix, one does not know from the word whether walked is present or past at all. The erosion of prefixes and suffixes like these was particularly central in turning the Latin sentence into the French one. There is a certain tendency for sound change to "go easy on" these prefixes and suffixes to preserve important aspects of the language's machinery. But this is only a tendency, and just as often sound change wreaks its termite-like destruction even on the support beams of a grammar.

Not the answer you're looking for? Browse other questions tagged orthography pronunciation sound-change french or ask your own question.

5
How and why did so many French letters become silent?

7
Are there any words that have merged in pronunciation and spelling and then separated again?
5
Irregular penultimate stress in English words from classical sources
6
Historical development of English pronunciation(s) of "hygiene"
5
Origin of the English word 'tooth' being pronounced /tʊθ/?
13
How did Greek loanwords with 'ae' come to be pronounced [i] in modern English?
1
Why was 'u' invented?
1
Is "nea" <- "*nivis" proof that metaphonic diphthongisation occured in Romanian before the loss of intervocalic "v"?
17
Are there modern languages without standardized spelling? If not, why?