Why vowels sound different from each other

This might be a basic question but I am confused about how mouth shapes for vowels, at a deeper level, are producing different sounds. Wanted to see if one could demonstrate with another instrument like a pipe, how you could create the vowel sounds.

For example, IPA divides the sounds into front and back of the mouth/tongue blocking airflow, and open/closed-ness of the air passage by the tongue. This produces the ee /i/ sound, the oo sound, the ah sound, the oh sound, and everything in between. But I'm wondering how it actually works. How the shape of the mouth actually produces these sounds. For example, I don't know if we can just hear a recording of an ee in the middle of its pronunciation, and tell it's an ee sound. Maybe we can only tell they are the vowel sounds because of their relative sound in relation to each other, I don't know.

To further demonstrate my confusion, take for example a hose. If you squeeze the hose, the water comes out faster. That makes sense. Because there is less space for the water to come out of. There is a complete explanation there. Likewise, when an ambulance passes by and you hear the doppler effect, that is because the sound waves are compressed as they come toward you, and expanded as they move away. That gives a complete explanation of why the sound changes as the ambulance passes by.

If I try to describe the "ah" sound, and say it's because the "mouth is shaped like x, and the tongue is placed here...", that doesn't explain why that is producing the "ah" sound vs. the "ee" sound. Something that would fully explain it is by saying "the open cavity in the mouth produces a sound wave that is shaped in what we hear as an "ah" sound ". Or "the ee" is two sine waves in this formation" sort of thing. Also, for the "oo" sound, I don't see how "rounding the lips" produces that sound. I'm wondering what it does to the sound waves to give it that "O" sound.

I'm wondering if one can describe how the basic vowel sounds get their distinct "sound", or what that sound even is.

As a reference, I understand how tone (musically) can be expressed, because it's defined by the sound waves. Same with loudness / amplitude. But vowel sounds, I don't fully get yet.

Good question! This comes down to formants.

Any periodic sound (from a violin, a trumpet, a guitar, or a human voice, among many many others) can be written as the sum of a whole bunch of sine waves at different "pitches" (frequencies). The mathematical details are too complicated to include here, but if you're interested, look into the harmonic series, and the Fourier transform.

The lowest of these pitches is called F0, the "fundamental frequency", and that's what people normally mean when they talk about the pitch of a sound. But the other pitches above it, called "harmonics", are what make a violin sound different from a trumpet, even when they're playing the same fundamental pitch (the same note). The human vocal chords produce harmonics a bit like a violin's: a sawtooth wave. And while we can change the fundamental frequency, we don't really have enough control of the vocal chords to change the harmonics.

Fortunately, there's more to our vocal tract than just the vocal chords!

As you know, pronouncing a vowel basically involves constricting the mouth and throat at various different places. And where exactly the constriction happens affects these harmonics, applying a "filter" to the sound from our vocal chords.

In particular, the constrictions create "formants": groups of harmonics that are louder than others. And using the Fourier transform, we can plot exactly where these formants lie. It turns out that F1, the first formant, corresponds quite elegantly to vowel height (how high the tongue is in the mouth), F2 to vowel backness (where exactly the tongue is closest to the roof of the mouth), and F3 a bit less elegantly to rounding.

This is a diagram from some of my own research: the blue line shows the amplitude of each harmonic, the red line is the "envelope" (a way of describing the filter effect), and the peaks are the formants.

As a matter of fact, you can even create recognizable vowels with a plastic tube. If you use a more flexible tube, you can even change the vowel while "playing" it, by squeezing in appropriate places.

Just wanted to add this diagram which shows the subjective vowel sounds as they correspond to the combination of F1 and F2 formants in a two-dimensional chart. The chart is from this page of the National Center for Voice and Speech's website. 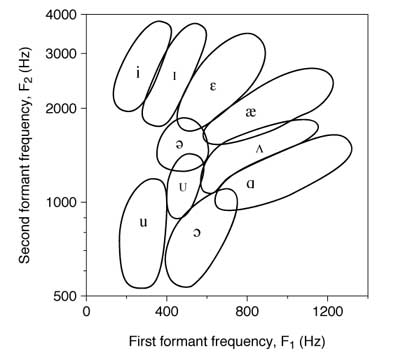 F1 is typically generated at the front of the mouth and F2 typically in the throat or back of the mouth, both controlled mostly by placement of the tongue. These vowel sounds can be further shaped by rounding of the lips (F3), though that isn't as distinct in English as it is in some other languages.

You can, in fact, simulate vowel sounds on a synthesizer by filtering a base oscillator using two band pass filters set at F1 and F2 formant frequencies.

I think what you are asking about is "what exactly is a vowel sound?" (and eventually you'd like to know how to compute that answer from knowing what the lips and tongue are doing". Here's a short answer, aimed at explaining how to design a kind of vowel synthesizer. Voiced sounds start with a sound source created by vocal fold vibrations, let's say 100 Hz. This gives you a complex wave with components at 100Hz, 200Hz, 300Hz etc, and you specify the amplitude for each component. Overall, the amplitude slopes downward as frequency increases, so that there is basically nothing at frequencies above 7000 Hz. There are "resonances", i.e. frequency bands, where the amplitude is higher, so that a band of about 6 harmonics centered around 400 Hz, the amplitude will be higher, then is falls off, and then around 2000 Hz there is another increase in amplitude, and again at 2400 and 3500. These are the formants (F1, F2, F3, F4). By fiddling with the frequency where these amplitude peaks occur, you can make different-sounding vowel noises. You can also make some strange noises that don't sound like possible human vowels.

The idea here is that you compute sine waves at integer multiples of the fundamental frequency, and magnify the basic sine function by a coefficient representing an appropriate amplitude; then sum up all of the sine waves. (Then convert to a wav file and play). Use Praat to view waveforms and get spectral analysis. There are fancier ways of synthesizing vowels, but I believe that simple "adding the components" is the best way to get your head around the conceptual nature of complex waves. And use Johnson's book.

Not the answer you're looking for? Browse other questions tagged phonetics vowels or ask your own question.

6
Why is vowel phonology represented in a trapezoid instead of a square?
3
Does the southern pronunciation of Jenny have a triphthong in it?

4
Do some words have secondary or unintended click consonants?
0
Are there resources that exploit phones of English, to teach how to phonate all IPA phones?
6
How many different vowels are there?
1
Types of Sound Variations (Like Accents and Tones) in Languages
3
Why r, h, and w aren't vowels
7
What makes certain sounds linguistically "rarer" than others?
0
How linguists determine the sounds a speaker is performing