Deducing a rule out of set of examples

Consider the following Spanish words, written in IPA (with their English translation): 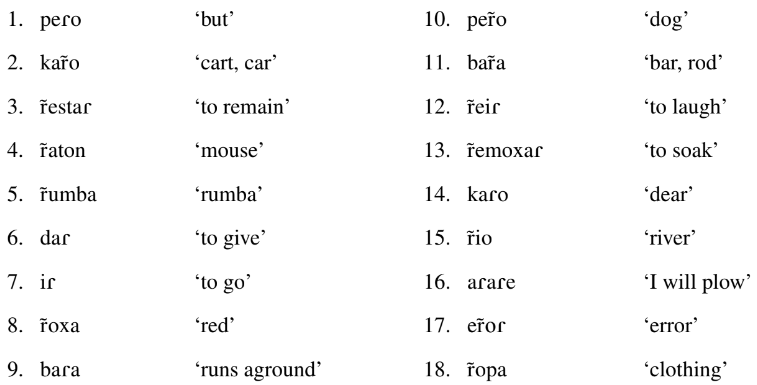 And the same question for middle position and final position

Observing that only one consonant appear at the initial/final position and that changing one with another at middle position changes word's meaning (i.e. (1) and (10)), my conclusion is that ɾ and ̃r are two different phonemes and not allophones of one phoneme. Is my analysis correct?

You cannot deduce anything from the data. You may conclude, but not all conclusions are deductions. To conclude that there is or is not a contrast in initial position, you have to know the rules of the game. A possible (common) "rule of the game" is "if there are minimal pairs distinguishing X and Y in a position, then X and Y contrast in that position". There are no minimal pairs in initial position in these. However, the minimal pair test is not the only rule of the game. An alternative rule of the game is based on whether there is a rule that derives X from Y in that context. In that case, you would also have to figure out what the rule would be deriving X from Y.

Another rule-of-the-game problem (a veritable universal problem in the profession) is that if you have proof that two things contrast, you can say "yes", but you can never say "no", because the question isn't stated as being dataset-relative (i.e. "in these examples..."). For all we know, the next word will present us with a minimal pair. If we assume that "no" is possible for the case where there is no evidence, then "no" would be correct.

You should be proud of yourself for understanding the concept "phoneme" well enough to see that even though there are contexts where the contrast is neutralized, those sounds are distinct phonemes. I disapprove of the metaphor that using X vs Y "changes the meaning": the word "dog" didn't start out meaning "but" and change (nor the converse), instead one phoneme occurs in one word (peɾo), and a different phoneme appears in another word (pero). Incidentally, "dog" is [pero], not [per̃o], which indicates a nasalized r in IPA. The evidence that the data are in IPA is pretty much non-existent – an example like rancho would clarify what system is being used.

Elaborating on the alternative to requiring minimal pairs ("can you write a rule predicting X from Y"), here is a hypothetical dataset (because it's made up and I assert that these are different words, we don't need glosses). The question is whether [t] and [r] contrast.

There are no minimal pairs: does that prove that these are separate phonemes? It does not, if you can provide rules that derive all cases of [t] from /r/ or vice versa. It may seem like deriving one from the other is impossible. However, [r] mostly appears before [a] and [o], never before [u] etc. More than one rule is necessary: t→r/_a plus non-coronal consonant; t→r/_in; t→r/_oCo. Given these rules, r can be treated as an allophone of /t/. A standard objection is "But that requires a lot of rules", and the proper response to that is "So how does that invalidate my analysis?". There is another rule of the game, to the effect that if you possibly can treat X as an allophone of Y, you should. I think that rule is bad, and you need something more than simply "because I can eliminate that phoneme" as a justification.

Writing rr for the tilde-r (for convenience), your answer (which I agree with) is consistent with the phonological system having the rules:

I would assume these rules if there is no evidence against them, and there is no such contrary evidence in the forms that are listed.

(In Natural Phonology, one would write "process" instead of "rule" in the above.)

Not the answer you're looking for? Browse other questions tagged phonology phonetics ipa spanish allophones or ask your own question.

1
Is it possible to have an underlying phoneme in complementary distribution?
5
What were allophone rules for [r] in Old English and Middle English?
5
Are there letters or diacritics in the IPA suitable for narrow/phonetic descriptions of the Malay final -h?
10
Why don't minimal pairs like “быть” and “бить” prove that /ɨ/ and /i/ are separate phonemes in Russian?
1
Allophones of an archiphoneme
6
Why do so many languages have both an alveolar “light L” [l] and a velarized “dark L” [ɫ] allophone?
1
General American English words for IPA vowel sounds
1
Sources on statistics of phonological properties of languages