Is the schwa sound consistent?

The first syllable in "about" (ə'baʊt) is schwa, so is the second one in the "salad" ('sæləd), but iv'e never heard them pronounced the same way.

in salad it sounds more like the i in "trick". mountain ('maʊntən) also has a schwa at the end, but to me it doesn't sound like about, much more like the sound in trick.

So is it a consistent sound?

No, it is not. The English sound transcribed as "schwa" (ə) is known to be quite variable. There are a number of things that affect how it sounds.

In American accents, it's common for a "schwa" to be more similar to an an [ɪ] sound (the "i" in "trick") when it's in the middle of a word. For many American English speakers, there is no consistently perceptible contrast between /ə/ and /ɪ/ in unstressed word-internal syllables (this has been called the "weak vowel merger"). Sometimes the merged vowel is transcribed as [ɨ].

A "schwa" before an /n/ is often realized as a "syllabic nasal consonant", which can be transcribed as [n̩].

Here's a previous answer post I wrote that has some more details: When should I use /ə/ or /ɪ/ and why does it seem like they're not used correctly?

Here are some additional comments about IPA transcription, since some comments and other answers have brought up that topic. IPA can be used either to represent certain phonetic vowel qualities (in this use, it is an approximation, since vowels differ along a multi-dimensional continuum but IPA letters are discrete), or to represent certain distinctive features of elements of a language's sound system (this is a "phonological" transcription). In generic transcriptions of the kind you find in a dictionary, it doesn't necessarily represent your pronunciation, or the pronunciation that you are used to hearing; it might represent a conventionalized standard or the way that the word used to be pronounced. So there is potentially a lot of space between an IPA transcription and the actual phonetic form of a word's pronunciation. The use of the symbol "schwa" in a transcription could mean "this word is pronounced with a phonetically mid-central vowel", or it could mean "this word acts in the phonological system of (some variety of) English like it has a fully unstressed vowel in this position", or it could mean "in the most influential historical accents of English, this word was pronounced with a phonetically mid-central vowel".

I am sure opinions about this will differ from mine, but in my view, a schwa is always a schwa -- a specific sound articulated in a specific way. It is that sound articulated when a vowel is pronounced without raising the tongue from its neutral position, or lowering it, or backing it, or fronting it, or rounding the lips, or modifying it with any other secondary articulation.

I don't doubt that very often phonologists will transcribe a schwa when they hear a vowel somewhat higher or fronter than a real schwa. I myself am not above doing this. But it's a mistake, or at least remarkably sloppy. We want to be studying the actual sounds of a language, not linguists' transcriptional practices. The use of the schwa phonetic symbol as a sort of cover symbol for several different sounds is a fact of linguists, not a fact of language.

Greg Lee's observation is on target. The question posed presupposes without argument that the unstressed vowels of 'salad' and 'about' are [ə]. That is classic question-begging, at least for most American dialects. The standard procedure for phonemic analysis is to analyze the distribution of surface segments of a phonetically-transcribed corpus and determine whether certain segments are contextually-predictable and are in complementary distribution with some other segments. We don't know by divine authority that the unstressed vowels in 'about, abut, upper, salad' etc. are phonemically "schwa". We do know that in about, abut the first vowel phonetically matches IPA standard for [ə]. It is entirely credible to phonemicize the unstressed vowel of 'salad' as [ɪ], just as one would phonemicize the unstressed vowel of ignore as [ɪ]. It is also well-known that [ə] and [ʌ] are in complementary distribution (the latter is only unstressed)

There is a phonological rule neutralizing unstressed vowels in certain positions, which leads to vowel quality neutralizations associated with stress changes: for example [ˈtɛlVgræf], [tVˈlɛgrVfi]; [ˈdɛmVkrat], [dVˈmakrVsi]; [ˌkætVˈstrafVk], [kVˈtæstrVfi]. The realization of that vowel V varies in American English between [ɪ ɨ ə]. There is no phonological argument that the output of reduction must be treated as [ə], as opposed to [ɨ], [ɪ], or [ʌ]. IMO the prior question is "what vowel is in this token of this word?", so that we face the individual variability of the initial vowel of [əˈtamɪk] ~ [ɨˈtamɪk] and [tɪˈlɛgrəfi] ~ [tɨˈlɛgrəfi]. But what is the phonemic value of the vowel in these words? It's obvious, in these examples: /æ/ versus /ɛ/. In 'solid' we can tell that the unstressed vowel is /ɪ/ because of 'solidity'. Since there hardly ever or never is actual [ə] is 'salad' (it's usually [ɪ]), there's no reason to posit abstract 'schwa' in that word.

Even phonetically, the schwa has stood for any "obscure" or "neutral" vowel that is not attributable to a particular peripheral ("cardinal") value for much of the IPA's history.

From Aim and Principles of the International Phonetic Association (1904: 9):

ə stands for any obscure vowel, like the first of English again. When it is found useful to distinguish two such vowels, the closer one may be written ə and the opener ɐ.

From The Principles of the International Phonetic Association (1949: 7): 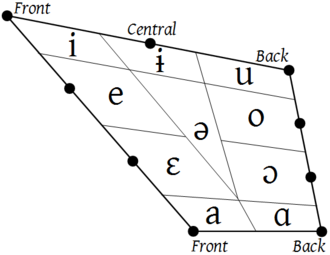 It was only in 1993 that [ɘ ɵ ɜ ɞ] came to represent the current values, and they are still little employed as defined in the current IPA.

Not the answer you're looking for? Browse other questions tagged english phonology phonetics ipa or ask your own question.

2
When should I use /ə/ or /ɪ/ and why does it seem like they're not used correctly?

2
Historical pronunciation of words in English
6
Why don't any languages have strictly one character for every single phonetic sound?
0
Why is the "long i" sound in English written /aɪ/?
1
The anatomy of the L sound
2
Why English is missing some phoneme sequences (/aʊv/ or /aʊp/)
1
/t/ sound is pronounced like [ts] in British English
0
The A sound in Ask and At